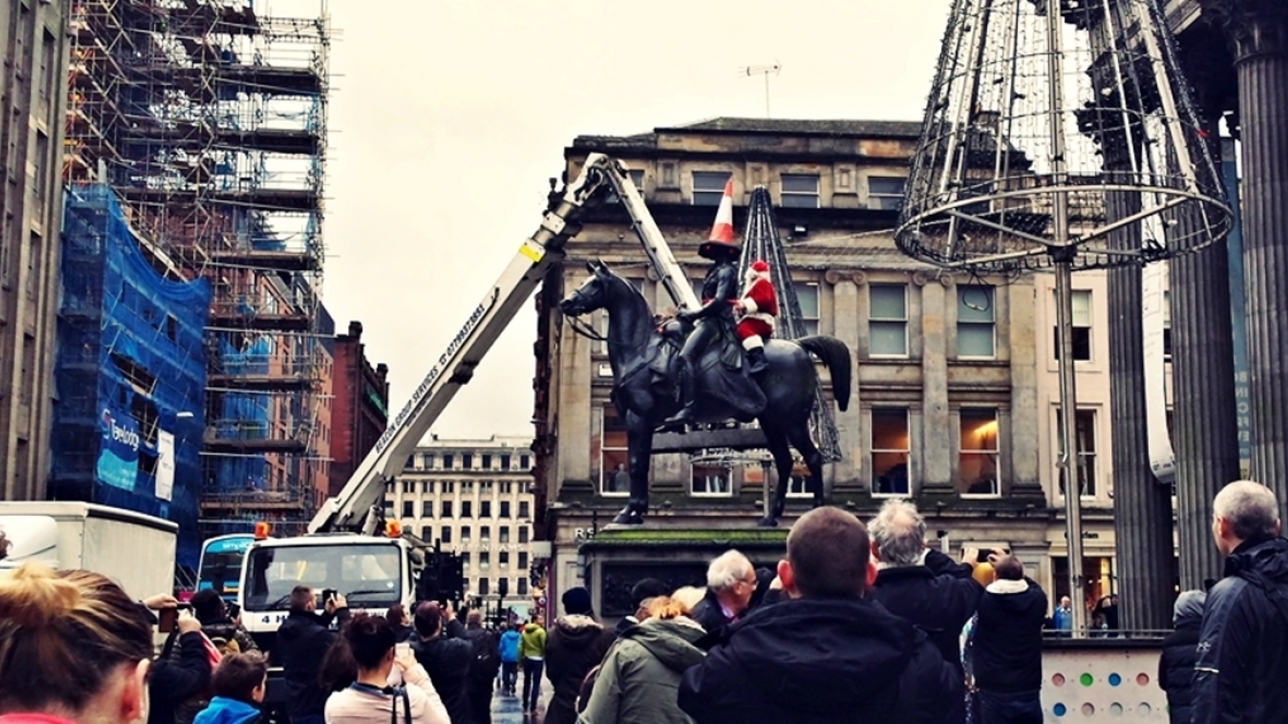 “Where were you when….?” is often a question asked when a ground breaking, globally traumatic or history shaping moment occurs. You know the kind, the first man on the moon, JFK, collapse of the Berlin Wall, 9/11. Well, where were you on the day that Christmas almost got cancelled? Where were you yesterday morning? Where were you when Santa took a ride on the Duke of Wellington’s horse, was eventually led down by the Fire Brigade and then escorted away by a couple of Glasgow Police Officers as cries of “free Santa” filled the city centre?

It is a story that has found its way into newspapers today, and I was there to see this pivotal moment of yuletide drama unfold. I was due in Glasgow for a meeting to discuss Elim in Scotland’s centenary celebrations at the SECC Armadillo. As I exited Queen Street train station I caught sight of a crane platform beside the iconic Duke of Wellington bronze statue, with the famous traffic cone adorning the Duke’s head. I saw someone dressed as Santa sit on the back of the horse and get lashed to it. All of a sudden hands were up as a sea of mobile phones started to take pictures/video and social media became awash with the news that Santa had ditched Rudolph for a historic horse. At first I thought it must have been Glasgow City Council advertising their Christmas events, but as I walked around the plinth of the statue I read on a 2 metre vinyl banner that this was a protest “sit in”, an awareness raising exercise for a group seeking justice. 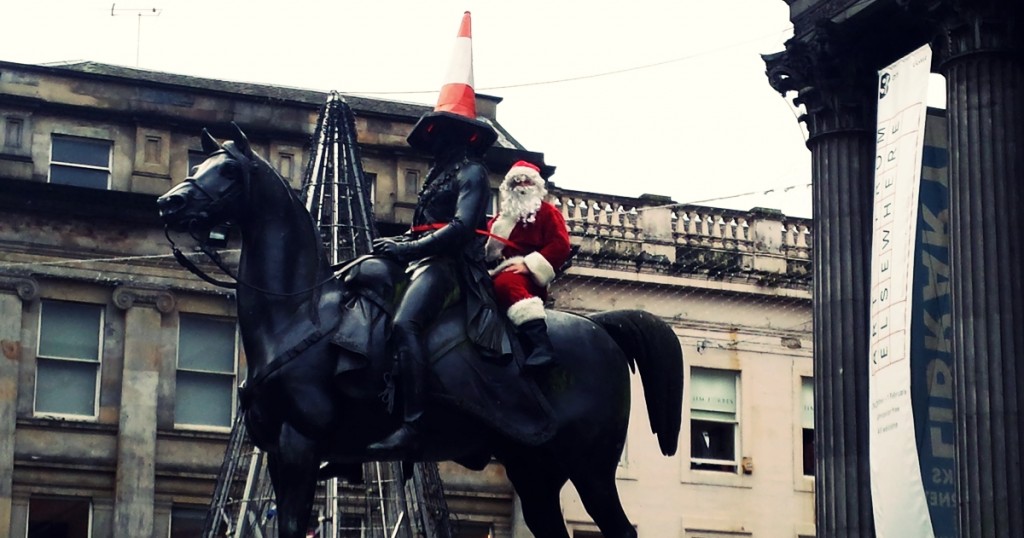 Santa protesting on the Duke of Wellington’s Horse , Glasgow

It got me thinking how far someone would you or I go for a cause. This publicity stunt cost a Santa suit (& it was a quality one!) the hire of a crane/platform, the printing of a banner, the risk of a criminal record and fine and the potential bill for Police, Fire and Ambulance to attend the scene. Here was someone who passionately believed about his cause and was willing to do whatever it took to get noticed and to communicate the message of his cause to whomever would stop, look and listen, and they did. He made an impact on hundreds of people who stopped and probably thousands who “shared” the moment via facebook, twitter, Instagram etc. People stopped, people photographed, people shared and passed on what they had heard and saw.

Now I am not advocating breaking the law, but as Christian believers who have a “Good News” Gospel message to communicate of God’s love and of Jesus’ coming, death and resurrection we have a cause to invest our lives in! On issues of faith and justice to what lengths might you go to let someone know the message of hope that has shaped your life and guaranteed your forever? Is there a social justice cause without a voice that other people need to hear about? Are there creative ways to seize the day, capture the moment, demonstrate and share God’s love?

The great news is that even had Santa been imprisoned yesterday Christmas wouldn’t have been cancelled. You see, Christmas isn’t about the presents Santa brings but is actually about the God’s gift of “Immanuel”, Jesus Christ “God with us”. He is the baby of Bethlehem who was also the Christ of Calvary. Because Jesus came and died on the cross we have the opportunity to receive forgiveness of our wrongs, enjoy friendship with Father God and know the assurance of spending forever with Him in heaven. Now those are gifts worth receiving this Christmas. Gifts worth shouting about, gifts worth sharing with others!

May you have the greatest Christmas ever, not because Santa cheers up your day, but because Jesus transforms your life!

Find out more about our Christmas services here