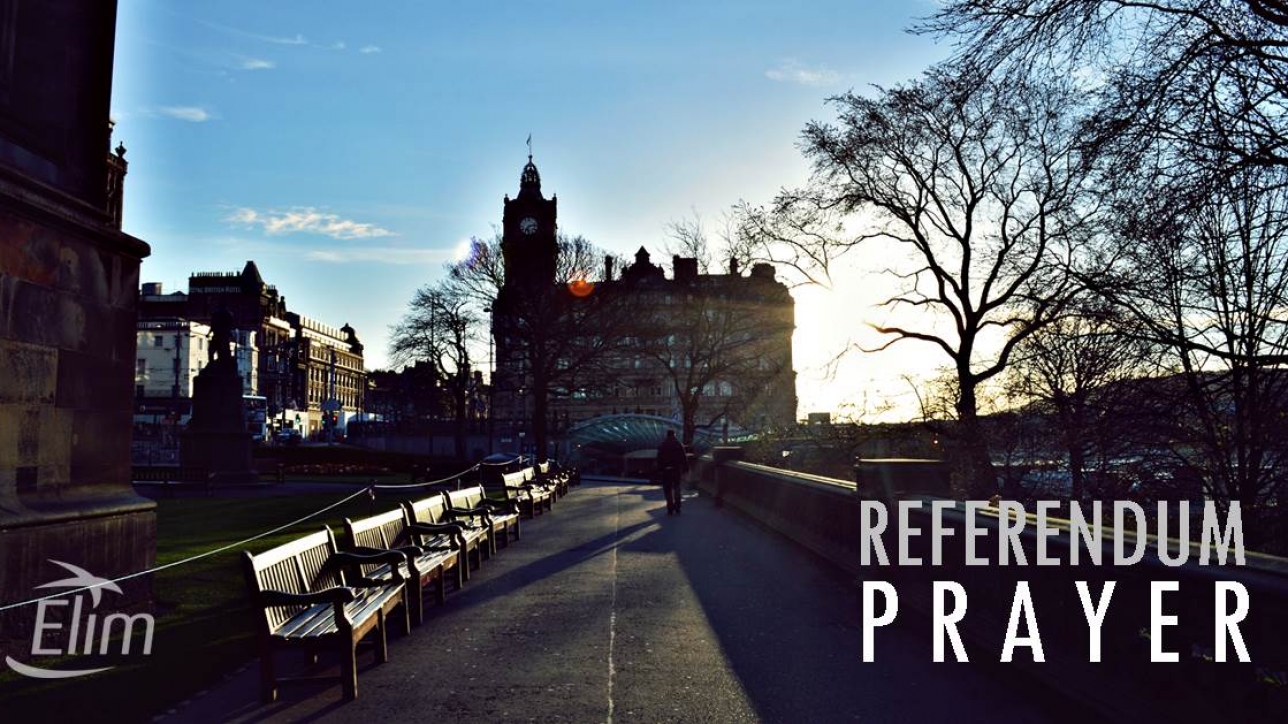 The most significant vote in our nation’s history takes place on 18th September. In the days leading up to this key date I invite you to spend some time each day praying for our country.

THURSDAY 14 AUGUST – Pray that the leaders of the “Yes” & “No” campaigns will become aware of God’s Presence.

FRIDAY 15 AUGUST Pray for Christians in politics, that they will honour King Jesus as they serve the nation.

SATURDAY 16 AUGUST Pray that regardless of the outcome that our Christian heritage in Scotland will be honoured and will be championed in Scotland.

SUNDAY 17 AUGUST Give thanks to God that in His sovereignty the result will not surprise Him. He is in control!

MONDAY 18 AUGUST Pray for friendships currently divided by different “Yes/No” opinions that unity will be restored.

TUESDAY 19 AUGUST “The government will be on his shoulders” (Isaiah 9:16). Pray for Jesus’ reign in the nation.

WEDNESDAY 20 AUGUST Ask God to bring peace to business leaders and owners who might concerned about the outcome of the vote.

FRIDAY 22 AUGUST Pray that the economy of our nation would become stronger as a result of the vote.

SATURDAY 23 AUGUST Pray that those living in the most deprived areas would experience improved living conditions as a result of the outcome of the vote.

SUNDAY 24 AUGUST Thank God for living in a democracy where debate and difference of opinion are allowed.

MONDAY 25 AUGUST Pray that politicians’ visions of Scotland would be built on Biblical values.’

WEDNESDAY 27 AUGUST Pray for your MSP today. Pray that they would be empowered by God in their life today.

THURSDAY 28 AUGUST Pray for civil servants who will have to act in light of the vote on 18th Sept.

FRIDAY 29 AUGUST Pray for civil servants who will have to act in light of the vote on 18th Sept.

SATURDAY 30 AUGUST Ask the Lord to forgive unbiblical political decisions that have been made in the past.

SUNDAY 31 AUGUST  Pray that Scotland’s standing in the world will not be affected by the outcome of the vote.

MONDAY 1 SEPTEMBER  Pray that Christians in Scotland will help shape the future direction of the country.

TUESDAY 2 SEPTEMBER  Pray that any new constitution that may be drawn up will be God centred and honouring.

WEDNESDAY 3 SEPTEMBER  Pray peace for any who have fears concerning Scotland’s future.

THURSDAY 4 SEPTEMBER Pray for wisdom for those who are part of the political process.

FRIDAY 5 SEPTEMBER Pray for wisdom for voters in our nation.

SATURDAY 6 SEPTEMBER Pray for all those who will be voting for the first time.

SUNDAY 7 SEPTEMBER Pray that there is no apathy about voting, that all will be concerned enough to turn out.

MONDAY 8 SEPTEMBER Pray for political decisions that will bring a smile to the face of God.

TUESDAY 9 SEPTEMBER Pray that our political leaders receive visions and dreams from heaven that will motivate their lives.

WEDNESDAY 10 SEPTEMBER Ask the Lord for wisdom as you sift through the arguments surrounding the vote.

THURSDAY 11 SEPTEMBER Pray that in the days running up to the vote that there will be positive campaigning and no negative actions.

SATURDAY 13 SEPTEMBER Pray that reconciliation after the referendum will lead to revival.

SUNDAY 14 SEPTEMBER Pray for many MSP’s to come to faith in the Lord Jesus Christ.